Ricky Sandhu, Founder and Chairman of Urban-Air Port – opened the first operational vertiport prototype for EVTOLs in the world - visited Amsterdam last month. During the World Aviation Festival we were able to ask the young entrepreneur a few questions. “EVTOL companies recognize that they need to work with the infrastructure provider to make sure that we understand what their vehicles need and vice versa.”

On April 25th this year, Sandhu opened the world's first fully operational prototype testbed. It was open for three weeks and it attracted 15,000 visitors. “It was really exciting because it was the first time that such a piece of aviation infrastructure for advanced air mobility had been integrated into a complex urban centre. We were 60 seconds from Coventry City Centre and we were 60 seconds from Coventry's mainline railway station, and we were in a very compact site surrounded by towers. So it was the hardest location to locate a new vertiport, but it was also located within the Coventry Airport's flight restriction zone,” Sandhu explains. He and his team from Urban-Air Port made that decision to demonstrate how Urban-Air Port could create its own air traffic zone within a larger, more complex traditional aviation air traffic zone. It also meant that they couldn’t do it without the help of several partners, including the UK's civil aviation authorities.

But that allowed us to have over 150 cargo drone EVTOL flights take off safely, do a small flight and then land safely. It was the first time that such heavy cargo drones have ever flown in such a dense urban environment. So it was a really exciting opportunity for people to really get close to drone technologies, but also to actually see a 1:1 full-scale model of a passenger air taxi. For the first time people were able to get really close to a future mode of transport within a city.

For Sandhu and Urban-Air Port, the three weeks were more than just to show the technology of the transport, but also to let people experience what the actual user experience would be like. And that is what's going to be really important for this industry to take off.

After the three week event, the whole structure of the prototype vertiport - Air One - was dismantled and stored for future use. Sandhu: “There was no mark left of it being there in this Coventry City Centre car park. And that was important because cities are learning how to integrate this technology. Developers, city planners, local communities, our future customers, aviation authorities and airports don't know how this is going to pan out. So for us, it was important that we don't have a permanent structure because there's a lot of other factors that we need to work on together with stakeholders. So we dismantled Air One and now there's a couple of locations that are vying for it to be re-built for continued testing in other locations.”

“The next stage for us is to take this prototype to whichever city we end up going to and then test the kind of upgrades and improvements that we know we want to make to demonstrate how it would fit within that country’s regulatory framework. So there's a lot of testing that we want to do. And also the EVTOL manufacturers, we're having a lot of engagement with all the leading EVTOL companies. And the reason why we're getting that engagement now is because they recognize that they need to work with the infrastructure provider to make sure that we understand what their vehicle needs are and vice versa. Our goal is to bring those needs together, because that's the only way that we're actually going to see permanent Air Ones around the world.” 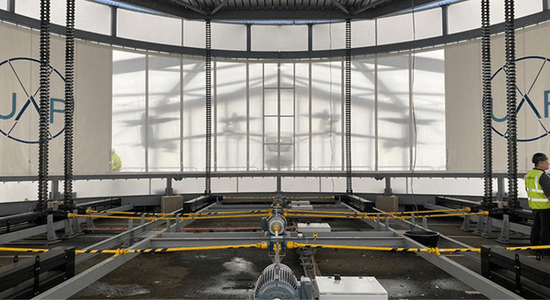 In Coventry, Sandhu worked with several stakeholders, all important to build the infrastructure needed to make urban air mobility possible. “The future of flight will begin on the ground. That's what people are beginning to realise. What we did in Coventry was all about integrating a new disruptive solution in the middle of a city centre. I've worked on high speed railway stations, railway stations, airports and so on. To build any kind of infrastructure is complicated and there's a huge amount of planning that goes around it to support it. We had to work with developers, real estate owners and planning & regulatory authorities.”

The key thing that Sandhu wanted to demonstrate was the environmental impact. “As with any infrastructure the biggest challenge is noise. EVTOLs may be quieter than helicopters, but nonetheless, they are not silent. Our design parameters were intended to tackle some of the environmental challenges, which are intended to help overcome some of the stakeholder hurdles that do exist. And we've demonstrated that we have the ability to overcome them to make this industry actually viable.”

After the successful test in Coventry and the scaling up of a prototype to a permanent fully operational vertiport -which will most likely arise somewhere in the United States, the next steps depend mainly on sufficient investment, according to Sandhu. “What we don't want is EVTOL companies going off on a trajectory, but when they're ready to fly, we don't have the ground infrastructure in place. It's a little bit like electric cars. I mean, Amsterdam is amazing. There's chargers everywhere. But in a lot of cities they've introduced electric cars, but they're still massively catching up on electric charging infrastructure. We need to not make that mistake for this industry. The industry is happening. The investments are pouring into these vehicles. We need to now invest in the infrastructure and start to pave the way for these vehicles to provide that sustainable air journey in our cities for the future.”

Stay up to date on the latest Innovative Air Mobility development

Share your stories with us
Do you have knowledge on current air solutions, potential innovations and vital regulations you would like to share with the UAS community? The Amsterdam Drone Week website and social media channels are a great platform to showcase your stories!
Please contact our Brand Marketing Manager Marjolein van der Wielen.

Receive the Amsterdam Drone Week newsletter - straight to your inbox!